Smith Square, five minute’s walk from the Houses of Parliament, is dominated by St John’s Smith Square, the baroque church designed by Thomas Archer and completed in 1728 which was converted to a concert hall after being bombed in the Second World War. At one time the Square housed the headquarters of both the Conservative […]

The title of Saatchi’s new exhibition “Champagne Life” might conjure up images of bohemian dancing with champagne on the beach, but it is taken from one of Julia Wachel’s pictures which contrasts the lonely life of artists working creatively for all the hours of the day that they can in their cold Spartan studios with […]

Hand in hand, lovers stroll along the Malecon. The rolling sea crashes onto the rocks under the romantic Cuban sky with the wild beat of Latin American music floating across from the open windows of the nearby buildings.   The change comes quickly – black clouds approach and the sea heaves as the wind blows the […] 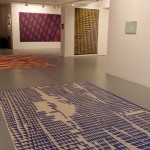 Who was the man who wore this steel helmet, almost still in pristine condition undamaged by the battle shells, the bullets and the stains of war?  He was a Sergeant, but why did he carry a well-used hammer, a worn leather pouch and white cloths with him the middle of a battlefield, in which the […]

Driving along the Pan-American Highway through Atacama Desert, one of the driest places on the planet, a huge white hand suddenly rises up, like a remnant of a huge ancient sculpture that may be buried underneath the sands, waiting to be excavated. “Mano del Desierto” by Chilean artist Mario Irarrázabal was installed in 1992 to […]

The timber steps are worn down with generations of workmen carrying tools, materials and finished products up and down the staircase.  Close your eyes and you can hear them shouting at each other above the noise of machinery and hammering and, perhaps, the odd gunshot.  Originally a 18th century family home with a ground floor […]

Looking like a young rebel of the 1960’s with his denim suit covered in badges (one of which appears to be of Elvis Presley) and holding a leaflet also with Elvis, Peter Blake’s “Self-Portrait with Badges” in Tate Britain is an appetiser to his exhibition “Peter Blake: Portraits and People”, at the Waddington Custot Galleries, […]

Melancholy musical sounds permeate the main galleries, adding a haunting sound to the historic portraits by artists such as Antony van Dyke, the Pre-Raphaelite paintings, Henry Moore’s stone and bronze sculptures, David Hockney’s double-portrait paintings and sculptures by Jacob Epstein and Anthony Caro.   The building prevents the sound reaching its furthest corners, so the room […] 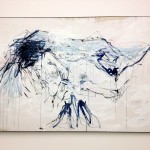