Once Boston’s main shopping area, with elegant buildings designed by top architects, Downtown Crossing in Boston had its heart torn out of it with the closure of Filenes Department store, with the original buildings gutted and left as an empty shell and the remainder demolished to leave a huge gaping hole, plus the loss of […]

New York now has its High Line, and may well have its Low Line by 2018; London will have The Line, a walking trail of international-quality contemporary sculpture which will open later in the year along a route that broadly follows the line of the Meridian, linking the Queen Elizabeth Olympic Park and the O2, […]

On 16th November, Renzo Piano’s eagerly-awaited new Art Museums building at Harvard University in Cambridge, Massachusetts will open to the public.  The Harvard Art Museums comprises the Fogg Museum, the Busch-Reisinger Museum, and the Arthur M. Sackler Museum which together have a stunning collection of 250,000 objects from ancient archaeological artifacts to contemporary art.  Established […]

The 2914 National Open Art annual exhibition has opened at Somerset House. The competition with £60,000 of prize money aims to “nurture creative talent from both emerging and professional artists, providing a truly open and fair platform for artists to exhibit, sell and promote their work“. Given that the exhibition is housed in one of […]

There are several photographers who provide fascinating records of industrial complexes, buildings and cities falling into decay, creating modern ruins as nature takes over, such as Daanoe (Daan Oude Elferink) and forgotten heritage photographer Matt Emmett.  Will the buildings they have photographed disappear like the Mayan ruins into the jungle? Detroit is a favourite, perhaps […] 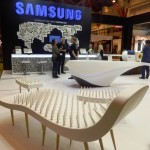 On show in the Eco, Design & Build area of 100 Percent Design at Earl’s Court are futuristic furniture designs commissioned from a number of architects and designers using STARON®, a versatile acrylic material used primarily for interiors in counters, worktops, shaped features, reception desks, furniture and also as a façade cladding.  The material is […]

Hot on the heels of London Fashion Week is the London Design Festival, a showcase of the best and the most recent product designs in London, the UK and abroad.   There are a huge number of events across the city, with three main shows – 100 Percent Design at Earl’s Court, Tent London and Superbrands […]

Hidden away near Fenchurch Street Station in the City of London is an early 18th century architectural gem which today flourishes both as a private dining club and a historic and characterful venue for the arts programme  “Art at Lloyds Club”. Lloyds Club, established in 1920, took over and refurbished the property in 2009.  Once […]

The young Venezuelan photographer Alejandro Cegarra has won this year’s Ian Parry Scholarship with his portfolio ‘The Tower of David’. This is the 25th year of the Scholarship which was established in the name of Ian Parry, a talented and well-respected 24-year old photojournalist who was tragically killed in a plane crash while on assignment […]