One of the great joys of London is the juxtaposition of the old with the new, whether it is in architecture as the city has developed or in exhibitions of modern art in historic settings.  The gallery at Raven Row in Artillery Lane, Spitalfields combines both.  It is a short distance from the financial district […]

The builders are finishing the final pieces of work and the cleaners are tidying and polishing ahead of the arrival of London’s newest art gallery – the Canada House Gallery – which reopens later this week as part of the refurbishment of the 1827 Canada House in Trafalgar Square, originally designed by Robert Smirke, architect […]

At the north end of Savile Row in London are three international private galleries in modern buildings, one of which at 23 Savile Row replaced the aptly-named “Fortress House”, formerly the home of English Heritage and now much improved with the new building designed by Eric Parry including a sculpture by Joel Shapiro above its entrance.  […]

One of the most unlikely areas to find international art galleries might be an industrial estate.  But, why not?  Industrial estates are full of a mixture of businesses often including other creative organisations, in joinery, metalwork or marble, or kitchen interiors or pehaps web-design, and can provide large high-volume inexpensive spaces, difficult to find or afford in […]

Malaga, birthplace of Pablo Picasso, has been developing as a major centre for the arts over the last 15 years with the opening of the Picasso Museum and the Centre for Contemporary Art in 2003 and the Museo Carmen Thyssen in 2011. This year will see two major new additions to its cultural life with the […] 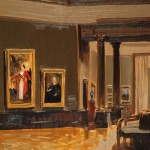 After the Second World War, the prevailing design for art galleries in Britain was simple white/light coloured spaces in which paintings were hung in a single row with no competition from elaborate Victorian decoration.   Ornate plaster ceilings were hidden behind new conservation-driven laylights, the plasterwork smashed to house the supporting steel frames and coloured decoration […]

Is the area between Piccadilly Circus and Carnaby Street, on the edge of Soho in London, becoming the new area for art galleries as former warehouse and manufacturing buildings are discovered and renovated, providing light, airy, flexible spaces only five minutes away from the more traditional locations around Cork Street and Bond Street in Mayfair? […]

“Where Art Can Take You” is the campaign to transform the San Francisco Museum of Modern Art (SFMOMA). The bold and recognisable existing building designed by Mario Botta opened in 1995 and was always a delight to visit, with its programme of changing exhibitions. It was however constrained by its size and is now closed […]