You are here: Home / Robert Therrien

The architectural design of art galleries go through phases.  We’ve had 18th and 19th century picture galleries in which to display old masters with their tall burgundy walls in an elegant architectural setting as at Dulwich and the National Gallery of Scotland, the modernist galleries of the 20th century such as Mies van der Rohe’s […] 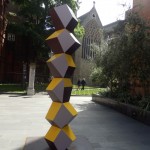 The entrance to the Mount Street Gardens in Mayfair, London has a new marker in the form of a colourful tower of polyhedra by the Canadian artist Angela Bulloch who has an exhibition of her work at the Simon Lee Gallery showing more of her geometric towers which build on Brancusi’s Endless Column using 21st […]