You are here: Home / BEERS London

Continuing a theme which we saw at J D Malet Gallery, three artists at BEERS London focused on the essence of human nature is in the 21st century in the fast-changing environment of this area of London around Old Street, where the human spirit all too often seems have been forgotten in the architectural race […]

The area around Old Street is the developing Tech-City of London, intertwined with art galleries such as Charlie Smith, Victoria Miro and BEERS London.  How appropriate therefore that Italian artist Leonardo Ulian, who combines technology. computing, science and art, should be showing his latest works here.  Instead of paint, Ulian uses the everyday components that […]

Canada, as we know it today, was established in 1867 when the colonies of Canada, New Brunswick and Nova Scotia joined together, to be followed by other provinces and territories.   Two exhibitions in London celebrate the 150th anniversary of this event, looking at different aspects of Canadian nationalism and identity through art. The Canadian flag […] 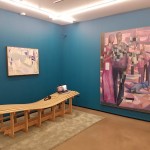 Goodbye white walls: Norwegian artist Sverre Bjertnæs has brought colour to Beers London with walls painted in colours which he has chosen to complement his art. ‘Silent Conditions’ is the first UK exhibition of the work of one of Norway’s most prominent artists, Sverre Bjertnæs, including collaborations with artists Bjarne Melgaard, Christer Glein and writer […]

Old Street in London is slowly improving with new property developments and the imaginative new pop-up outlets adding to the established shops within the underground station, but the environment is still pretty rough.  While the Red Gallery, on a site that is ripe for redevelopment, seems now to be inactive as an arts venue apart […] 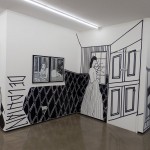 Imagine the amount of effort to cut electric plastic sticky black tape into undulating waves, the folds of elegant dresses, patterns on wallpaper, strings of pearls or other intricate shapes, a material which can provide a huge contrast between thick dense black stripes and more delicate intricate shapes. Benjamin Murphy uses black tape as his […] 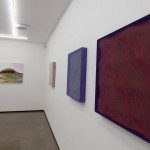 Looking directly ahead, there is a shape and a pattern to this one viewpoint at this particular moment in time. Move to the side and the space, the shape and the pattern changes, just as they do in real life.  Is this a flat hologram? No; its more subtle than that – it’s a three […]

Surrounded by the building sites of the Old Street area regeneration, BEERS London has established its art gallery in a building which now seems restrained in contrast to the tall blocks emerging everywhere around it and internally is a simple cool simple white box in for art.  The Gallery works with emerging and established artists […]