You are here: Home / Brazilian art

Considered one of the most avante-garde architects of his generation in Brazil, Flavio de Carvalho (1899-1973) was also a painter, particularly of portraits, a writer, and a designer of clothes which he had the courage to wear himself.  When you compare his achievements to that of the contemporary Brazilian painter Amadeo Luciano Lorenzato also on […]

Brazil is a country of contrasts – the energetic carnival in Rio, a passion for football, the modernist capital of Brazilia, the amazing landscape suffering from deforestation, and the simple life of the favelas.  Brazil itself only became independent from Portugal in 1922, after which it was more able to find its own artistic and […]

Next January, you can join the P&O ship Aurora for the cruise of a lifetime – 65 nights sailing from Southampton via Madiera and St Vincent to Brazil, to Salvador, Buzios and Rio de Janeiro, from there to start your exploration of South America. Today, the Brazilian Embassy in London occupies the former headquarters of […]

The windows are covered over with panels of tiles, with three cartoon-like characters floating through the glass, giving a hint of what is inside.   Inside, ceramic tiles decorate one of the walls, while the shadows of ceramic tiles weave through the paintings elsewhere.  Holland and Portugal: two countries with a tradition of producing and using decorated […] 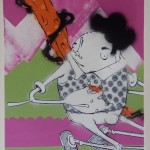 Walking down a dark stretch of Beak Street in Soho, London, a doorway is open, light bursting out onto the pavement.  In the darkness, the busy tourist rushing to complete Christmas shopping or to go to the theatre may just stop to notice the colourful Street Art on the wall outside which gives a hint […]