You are here: Home / Collective

There are two observatories in Edinburgh, the Royal Observatory on Blackford Hill and the City Observatory up on Calton Hill, along with monuments to Nelson, Dugald Stewart and Robert Burns and the unfinished National Monument with a predominant Greek architectural style reinforcing Edinburgh’s title of ‘Athens of the North’.  The history of the two observatories […] 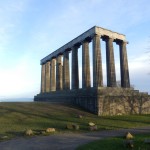