Following swiftly on from the Science Museum’s winter exhibition on Anxiety, its latest exhibition, opened before the coronavirus crisis, focuses on the issue of Gender, a subject which, like Climate Change, has taken a back seat during the current crisis, but will re-emerge once things return to some semblance of normality.  Anxiety and Gender often […]

Do you experience anxiety or are you one of those people who calmly sails through life, no matter how strong the stormy winds are howling around you?  Particularly relevant in these uncertain times of the coronavirus, the Science Gallery’s exhibition at the turn of the year focused on the wide-ranging issues about living with anxiety […]

By a piece of incredibly bad luck, King’s College London opened its latest and possibly its most ambition exhibition in the new cultural spaces of the Arcade in Bush House last Monday (16th March). Alfred Cohen (1920-2001) came to Europe from Chicago after the Second World War, first to Paris, then Heidelberg and London.  He […]

Over at London Bridge, the new Science Gallery at King’s College London has opened, bridging science, art and medicine with its first exhibition on the theme of Addiction; while at the Strand/Aldwych, with less of a razzmatazz, is a small, but fascinating exhibition on collaborative projects between artists and academics, from the wide spectrum of […]

Perhaps it is fortunate that a bomb destroyed the east wing of the old Guy’s Hospital at London Bridge in the Second World War, thus enabling rebuilding with reasonably flexible space free of historic constraints inside a reconstruction of the original façade.  The wing has now been transformed as the Science Gallery, one of South […]

This year’s Design Junction has moved to the south side of the river – shock!, horror!  Last year’s site at King’s Cross near Central St Martin’s is no longer available, having been landscaped and redeveloped, but fortunately the unloved and under-utilised car park at Doon Street has provided a new location.  It is astonishing to […] 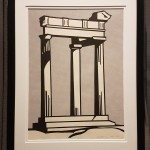 On top of the portico the two classical statues by the American artist Malvina Hoffman, unveiled in 1925 to symbolise the friendship across the Atlantic Ocean between America and Britain, have been dressed in fashionable blue and white shirts, jazzy cravats and trendy glasses, Today the statues announce other links across time and space, joining […]

While light is streaming in through the stained glass windows, the walls and ceiling of the elegant 18th century space is covered in blood as is the marble statue at the entrance.  It is perhaps appropriate that this is the chapel of a hospital, and one that was originally founded to treat incurables, where blood […]

How did an Essex County road sign end up in the River Thames?  Whose footballs were kicked too hard and too far and disappeared over the river’s edge?  Whose shoes floated around the murky waters to be washed up on the river bank.  Why is there only one – is there another somewhere to make […]