You are here: Home / River Thames

We have seen a collective madness this week with one of the results of the tragic events in the US being a spate of vandalism to statues of historic figures such as Winston Churchill who, whether individuals like it or not, are part of our heritage and, worse of all, to memorials to those who […]

How did an Essex County road sign end up in the River Thames?  Whose footballs were kicked too hard and too far and disappeared over the river’s edge?  Whose shoes floated around the murky waters to be washed up on the river bank.  Why is there only one – is there another somewhere to make […] 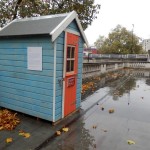 Has the River Thames flooded?  A beach hut has floated onto the River Terrace of Somerset House  and the adjacent windows of New Wing are filled up with blue water?   It’s a celebration of the 50th anniversary of the National Trust’s Nepture Coastline campaign to look after England and North Ireland’s coastline, appropriately being held […]

When my mother was a girl, she used to swim regularly in the Thames at Chiswick.  In those days the water was much cleaner than it is today, but swimming in the Thames may be making a comeback.  On Saturday 30th of August, the Great Swim takes place, with options for a mile or half […]

While there has been much focus on Thomas Heatherwick’s proposed Green Bridge over the River Thames in London, proposed to join the South Bank to Temple, proposals have been developed further upstream for a new £22m bridge over the Thames linking the developing areas of Battersea and Chelsea Harbour.   The ” Diamond Jubilee Footbridge” will […]