You are here: Home / london

Star fish travelling down the English Channel, up the River Thames to London and up the Rivers Rhine and Main to Frankfurt.  Could Nessie the Loch Ness monster also manage to leave Loch Ness and escape into the Moray Firth, down the coast and similarly across the Channel and up the rivers to Frankfurt, to look […]

From the outside, it looks like a natural grotto with flowing curved forms.  Inside, the spaces connect together like a series of underground caverns with light coming down from openings above, with glimpses out of the cave to the busy contrasting world of London outside and with shimmering lights from fish flying overhead. Water is the theme […]

Large areas of London have been destroyed, and burnt-out stonework and empty windows stand ruined against the sky with views to St Paul’s Cathedral which survived the Blitz in 1942 and represented the spirit of the British people during the darkest hours of the Second World War as recorded by photographer Wolfgang Suschitzky whose earlier photographs […] 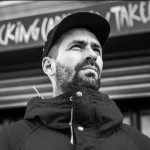 Fire extinguishers, tyres, wheels and basketball balls, combined with graphics of large-leafed plants, fruit and text – these are the elements of Lucas Prices’s sculptures, drawings and paintings in his solo exhibition “Dumb Poetry” at Lazarides Rathbone in London. Lucas Price started out as a street artist called Cyclops in the East End of London, where […] 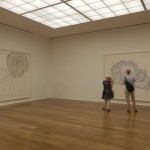 The American artist Roni Horn (born 1955) has two exhibitions this summer, “Butterfly to Oblivion” at the 2015 Foundation Vincent van Gogh in Arles, France and “Butterfly Doubt” at Hauser & Wirth in London, England. Horn is an American sculptor, installation artist,  draughtsman, photographer and writer.  She studied at Rhode Island School of Design, Providence […]

New London Architecture (NLA) has a new model of future developments in London. Paul Harrison and John Wood have created a model of a different city in their sculpture “A Film about a City” as part of their exhibition “An Almost Identical Copy” in London.  A surreal  of buildings have the fun of wooden building […]

Why are many offices still so sterile and corporate? Why do young creative entrepreneurs prefer to work in coffee shops?  Why do creative and innovative companies like Google provide funky and interesting workplaces? Many designers and clients continue to ponder on designs for the office in the 21st century, recognising that a well-designed and stimulating […]

As a young inexperienced graduate architect, one of my first projects was to create an artist’s studio near the east entrance of the National Gallery in London.  Now demolished, the first artist in residence was Maggi Hambling in 1980. At that time her focus seemed to be on portraits with a focus on warders during […]

Sculptor Alex Chinneck has again turned the world upside down with his latest urban sculpture called “Pick Yourself Up and Pull Yourself Together” in the Hungerford Car Park on London’s South Bank where a strip of tarmac appears to have lifted up and curved over, carrying with it a red Vauxhall Corsa car which remains […]