You are here: Home / Sculpture 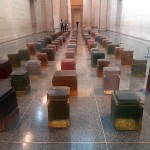 On the lawn in front on the stone neoclassical façade is a chicken shed, a rather strange find in the centre of London, but closer inspection reveals it’s not actually a chicken shed, it’s a cast of the space inside the shed, a new sculpture from Rachel Whiteread as she continues to record buildings through […]

The public spaces of Kings Place in London are enlivened with sculptures from Pangolin London, which also has an exhibition gallery in the building, an artistic partnership which should benefit everyone. Down on the lower floor of the main atrium, the aluminium sculpture “Brighter than Shadows” sparkles brightly as it reflects the light in its […] 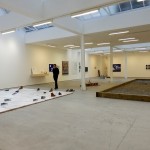 A chess board is laid out on the floor.  On Tuesdays and Fridays recorded music identifies each chess piece; on Wednesday shoes with the right feet on one side and the left feet on the other; on Thursday the players bring their own pieces (16 for each side), with the winner keeping them all, and […]

In 1968, as the Russian tanks rolled into Czechoslovakia and his home city of Prague, Jan Koblasova was away in Italy and subsequently gained asylum in Germany, while his work left at home was confiscated by the authorities. One of Czechoslovakia’s leading artists, and recognised across Europe (but little-known in the UK), the diverse range […]

In 1822, Frederick Law Olmstead was born, one of America’s foremost landscape architects, responsible for the design of many important parks and urban landscapes including Central Park in New York, Mount Royal Park in Montreal and the Niagara Reservation at Niagara Falls, American’s oldest state park. Across the Atlantic Ocean, in the rugged rural landscape […] 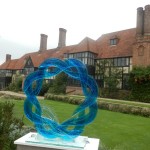 The gardens of the Royal Horticultural Society at Wisley are watched over by Henry Moore’s bronze “King and Queen” (1953).  This autumn, over 60 additional sculptures are keeping the King and Queen company, in the 18th annual “Surrey Sculpture Society Trail”.  A wide variety of garden sculptures, all for sale, provides a treasure trail that […]

Ian Hamilton Finlay (1925-2006) was a master of many trades – philosopher, poet, writer, artist and gardener.  Born in the Bahamas of Scottish parents, Finlay was educated at Dollar Academy in Clackmannanshire. At the end of the Second World War, he worked as a shepherd before he began to write short stories and poems while […]

Conrad Shawcross’s sculpture The Dappled Light of the Sun 2015 fills the entrance courtyard of the Royal Academy London and a substantial exhibition of his work is now on display at Victoria Miro’s gallery in Wharf Road.  The exhibition focusses on maquettes for realised and proposed commisions that demonstrate Shawcross’s exploration of the artistic and sculptural potential of […]

Canary Wharf has a strong tradition of commissioning contemporary art to enhance the working and social environment of workers and visitors, with over 60 major modern sculptures now on display across the Canary Wharf area.  Other organisations are adding to the collection, the latest addition being ‘A Grain of Rice’, commissioned by HSBC to celebrate […]

Three American artists are showing work which illustrates the creative variety and rich diversity of North American art.  Leon Golub and Richard Diebenkorn were both born in 1922, but their work could not be more different, reflecting different viewpoints of the period in which they were active, while Frank Stella’s sculpture is bang up to […]