You are here: Home / Scottish art

Sculptures by Boaz Vaadia, Philippe Hiquily and Bryan Kneale stand in guard in front of the long neoclassical brick Chelsea façade that conceals the annual international art and antique fair, Masterpiece, larger and better than before with art, furniture and decorative items from the antique to the contemporary, including a stylish 1958 Riva Tritone speedboat, […]

Sometimes, sadly not often enough, architecture and art come together in unexpected ways which heighten the experience of viewing art.   In the last space of the exhibition ‘Cradle of Magic’ at Newport Street Galleries, the immense shapes of the jagged sawtooth roof which allowed natural light down into the former workshop below take on […]

Two classical porticos, almost facing each other in Trafalgar Square in London, behind which are three exhibitions of Scottish art, running at the same time as the annual celebration of the birth of the Scottish poet Robert Burns. In the National Gallery, Edwin Landseer’s majestic Monarch of the Glen has travelled down from the National […]

Todd Garner is an artist who crosses the Atlantic and represents the strong creative connection between the USA and Scotland. Born in Pasadena in California, he took up a position as artist in residence at Edinburgh College of Art in1989, has been a practicing artist in Glasgow ever since, and is now an art tutor […]

As the tourists flood into the ground floor of Fortnum and Mason to buy their tea, biscuits or other delicacies as souvenirs of Britain, they should spend a moment and look at the brightly coloured paintings behind the main tilrl, contrasting with the rest of the décor:  Scottish artist John Bellamy has invaded Fortnum and […]

The Fleming Collection gallery in Berkeley Street was vacated by the Fleming-Wyfold Art Foundation as rents doubled, to enable the Foundation to focus on its policy of promoting Scottish art internationally, an example of which is the selection of works from recent graduates from Scottish art schools on show in the derelict industrial environment of the Studio at […]

A decayed old nineteenth century furniture factory with its exposed timber roof and peeling paint, located down a dark narrow alley, becomes an international contemporary art studio; new art contrasting with the old building.  In the week in which a digitally-created image of the destroyed Triumphal Arch of Palmyra in Syria was on display in […] 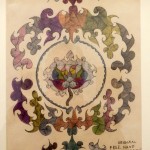 Buildings that look as if they are made of matchwood, snakes, birds, mysterious mythical animals, cheeky faces, colourful curving plants and flowers, “Greedies” and “Evils”, all intertwined in the ongoing battle between good and evil created from hundreds and thousands of penstrokes by the self-taught artist Scottie Wilson, considered one of the leading British “Outsider […] 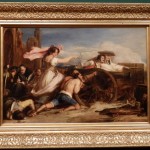 The noise and bustle of the Lawnmarket in Edinburgh with its rambling old buildings and St Giles Cathedral in the background, the rich interiors of Holyroodhouse and the ruins of the Abbey, the heather-clad mountains and the fast-moving rivers of the Scottish Highlands, Tam O’Shanter’s Chair, Sir Walter Scott’s daughter alone in his former dining room, […]

Ian Hamilton Finlay (1925-2006) was a master of many trades – philosopher, poet, writer, artist and gardener.  Born in the Bahamas of Scottish parents, Finlay was educated at Dollar Academy in Clackmannanshire. At the end of the Second World War, he worked as a shepherd before he began to write short stories and poems while […]