You are here: Home / Blain|Southern

At the same time as President Trump is announcing new USA tariffs on $300 billion of Chinese imports, raising the tensions in trade between the two countries, Ed Moses and Qin Feng are bridging across the cultures and the generations at Blain|Southern in London. In the cool white double-height spaces overlooking Hanover Street, paintings and ink […]

Sculptures by Boaz Vaadia, Philippe Hiquily and Bryan Kneale stand in guard in front of the long neoclassical brick Chelsea façade that conceals the annual international art and antique fair, Masterpiece, larger and better than before with art, furniture and decorative items from the antique to the contemporary, including a stylish 1958 Riva Tritone speedboat, […]

The grounds of Charles Barry’s great house at Cliveden, built in 1851-2 for the 2nd Duke of Sutherland and most famous as the home of Nancy Astor, with her famous dinner parties that everyone who was anyone attended, and who was the first woman MP to take a seat in the House of Parliament a […]

Heads slowly turn towards and away from each other, bodies rise from the black murky water, turning from grainy, black and white, unidentifiable shadows of themselves until we can see their full identity in high definition colour, while the artist himself floats submerged in water, something which challenges possibility. Bill Viola, who had an exhibition […]

Here is a question?  If you had to chose a colour which characterises London, what would it be?  Adults will probably say grey – to reflect the grey skies, concrete buildings, the murky river Thames and the dirty granite and stone pavements.  Children might be more positive and chose the colour red, the red of […] 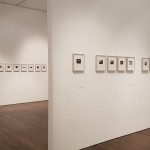 Remember the Poleroid Camera?  For a brief period of time in the history of photography, they were the ‘must-have’ of the era – even my mother had one.  Clunky cameras to carry around, but they gave instant pictures in the era before the mobile phone and digital camera took over.  They provided an informality catching […]

Is it a coincidence that artist Brian Griffiths work has a touch of the theatre, given he was born in Stratford on Avon in 1968? Is it something in the water, or the influence of an education influenced by Shakespeare and the many buildings to which Shakespeare is connected, including his old classroom. In ‘No […]

Cities are full of grids: streets layouts trying to tame the natural landscape, plus paving patterns, railing designs, building elevations and cladding systems, while underneath the streets are grids of pipes, ducts, tunnels and cables. Architects Squire and Partners played with colour in the grid of the recessed windows of the new development at 4/5 […]

It’s funny how things change use with time.  When I was a boy, pipe cleaners were for cleaning tobacco pipes, were only available in white and, as school children, we bought them from the newsagent to use as a makeshift modelling material, to be bent, shaped and twisted into stick figures of people and animals, […]