You are here: Home / Hauser & Wirth

The Bauhaus remains one of the defining art, architecture and design hot-beds of the 20th century; so much so that it is astonishing to think that it celebrates its centenary this year.  Founded in 1919 by Walter Gropius in Weimar, but sadly with only a short life, being closed down in 1933 as ‘degenerate’, many […]

Goodbye white gallery walls!  After the initial reception area, the walls are traditional burgundy, the colour favoured by 18th and 19th century picture galleries in great houses and new public galleries such as Playfair’s National Gallery of Scotland in Edinburgh and Sir John Soane’s Dulwich Picture Gallery.  The reason is very simple – the details […]

Somehow you think that if an artist can persuade the art establishment to award him the Turner Prize in 2001 with a single light bulb that turned on and off that he should be in the current government helping to move the country forward in the mad, chaotic and uncertain world of Brexit.  A light […]

Spread across three galleries in Zurich, London and Hong Kong, we see new works from Chinese artist Zeng Fanzhi.  Initially, you might think that London has lost out, because the largest works are in the other galleries, but in fact we have a case of ‘small is beautiful’ and the exhibition of his work in […]

Out in the Somerset countryside, with the fields turning yellow in the heatwave of the 2018 summer, there is something strange in the landscape floating behind a sea of plants which move slowly in the wind, with what could be circular yellow footsteps leading to it at the top of the hill.  Is it something […]

Hard steel reinforcing bar takes on the softness of a horse’s tail or the flow of a bird flying in the air. Concrete and steel become art.  Polish artist Monika Sosnowska grew up at a time when old buildings were being torn down, as in many European cities, to be replaced by modern concrete and […]

Two Polish artists:  The first is Monika Sosnowska who takes architectural materials such as reinforcement bars, concrete and steel and twists and turns them into new curving and waving sculptural shapes and configurations, on show against the backcloth of the streets outside through the large glass windows of Hauser & Wirth in London. Her interest […]

Remember those old black and white photographs of art galleries with the rooms full of potted palms and little chairs on which well-dressed ladies could sit and chat; with similarities to the glass houses at botanical gardens where white classical sculptures were interspersed among the palm trees?  All that was missing was the palm court […] 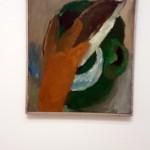