You are here: Home / Modern Art

Henry Maudsley was the pioneering British psychiatrist (1835-1918) who is commemorated in the Maudsley Hospital in South London, to which he contributed the sum of £30,000 towards its establishment in 1907 as a new mental health hospital which would also support teaching and research, which eventually was consolidated in the world-leading Institute of Psychiatry now […]

Following on from the auction on 1st October from the collection of Jeremy Lancaster, Christies, with Frieze on this month, along with the other auction houses pulled out the stops with auctions of post-war and contemporary art with a focus on British, German and Italian art, including Damien Hirst, Antony Gormley and Grayson Perry whose ceramic […]

Tate Modern at its best – bursting with creativity. In addition to the main exhibitions of Scandinavian artist Olafur Eliasson‘s immersive installations and Greek artist Takis’s kinetic art, plus the permanent collections and a fascinating exhibition of the work of the Russian artist Natalia Goncharova, the two buildings that combine to create Tate Modern, including […]

We are so used to art galleries being full of bold large works that it is a shock to find two gallery spaces with only seven works, each relatively small and hanging alone on an uncluttered pure wall.   There is something both sinister and religious about Norwegian/German artist Yngve Holen’s ‘Corpus Quality’, with his […]

It was time for the second phase of my Condo 2019 exploration, though unfortunately I picked one of the coldest days of January.  Having already explored Soho and Farrington, it was now time to move east to the varied areas of the East End of London.  As with my first visit, I discovered new galleries, […]

Nothing is quite what it seems….illusionary, reflective and transparent shapes, mirrors, along with kinetic and geometric installations by over 20 artists from around the world including Anish Kapoor, Fred Sandback, Alicja Kwade and Felix Gonzalez Torres in ‘Shape Shifters’ with art from the last 50 years celebrating the 50th anniversary of the Brutalist architecture of […] 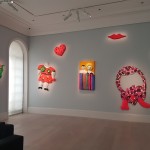 The sedate interiors of Sotheby’s have come alive in a blaze of fun and colour with an invasion of the work of French-American artist Niki de Saint Phaille (1930-2002), called by one critic ‘one of the most significant female and feminist artists of the 20th century’.  Humorous, irreverent, colourful, these works bring a breath of […]