You are here: Home / Richard Wilson

Nothing is quite what it seems….illusionary, reflective and transparent shapes, mirrors, along with kinetic and geometric installations by over 20 artists from around the world including Anish Kapoor, Fred Sandback, Alicja Kwade and Felix Gonzalez Torres in ‘Shape Shifters’ with art from the last 50 years celebrating the 50th anniversary of the Brutalist architecture of […]

There can’t be many, if any, art events on the scale of the Summer Exhibition which are still going strong after 250 years.  With such a momentous  anniversary and with its redevelopment project completed, the Royal Academy had to pull out all the stops this year so, who better to ask to coordinate it than […]

At the start, in the entrance courtyard, a 18m high steel arm turns and twists, with an all-seeing eye at its tip from which a camera continually sends images onto the wall above the main entrance.  At the end, high on the wall in the last gallery, another all-seeing eye watches visitors as they leave.  […] 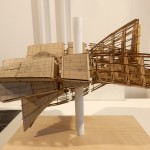 There is a revolution going on as new technology enables artists, architects, engineers and designers to create new forms which would previously have been impossible to design, engineer or manufacture.  Computers have enabled creative imagination to be unleashed by architects and artists with new forms that can be both simple and sophisticated.  This means new […]