You are here: Home / Royal Academy of Arts

One of the joys of the many galleries in London with their varied exhibitions, before and after coronavirus closures, is being able to see the work of two near-contemporaries and wonder why their work is so different and why they have such different artistic views of the world?  No doubt art aficionados do that all […]

This is a fascinating exhibition where you start with a fresh-faced young man starting out in his artistic career, full of promise, symbolism and ambition, and end with the reality of a wrinkled face at the end of his career and his life . Freud (1922-2011) is best known for his paintings of other people; […]

Having just spent some time travelling around Carcassonne in SW France and experienced a little of the area’s troubled history through visiting the medieval castles, cathedrals, churches and citadels, I started reading some fascinating books on the Inquisition.  It seems that man has a fixation with destruction – in medieval times, men, women and children […]

Standing under the vast cloud, your initial feeling is of the weight of the world above you.  But wait, there is a space in the centre of the cloud, a place of refuge, a place for dreaming.  Like many of Antony Gormley’s works, you need to look closely at the detail, for what appears a […]

Summer is coming to an end, the Summer Exhibition has finished and there is the noise of trolleys moving sculptures, of displays being dismantled and of paintings and drawings being carefully packed away.  Even Tacita Dean has gone as the Royal Academy starts to prepare for its autumn series of exhibitions. One of the huge […]

We all love mirrors – they reflect our personalities as we peer and preen in front of them.  And then, mirrors can tell a different story – think of the Halls of Mirrors in funfairs that cause such humour as they twist and distort their viewers.  And.o f course, there is the story of Snow […]

Ever since the Royal Academy took on the old Museum of Mankind in Burlington Gardens, it has been a frustration that the two buildings were not joined and, if visiting exhibitions in both, you had to walk round the streets from one to the other – though Burlington Arcade is always a pleasure to walk […] 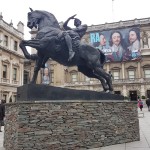 Standing proud and physically dominating the courtyard, the statue ‘Physical Energy’ was intended by the sculptor George Frederick Watts to represent the ongoing quest by men and women to seek new challenges, while they endlessly scan the horizon as they look to the future and new opportunities, described by Watts as ‘a symbol of that […]

If an original painting by Sam Francis was beyond your budget, then you should have gone to the London Original Print Fair, where Bernard Jacobson  has prints for sale, including Sam Francis’ “Senza Titolo II (Untled II)” from 1987 (and already sold when I visited). Prints, in all their forms, produced by artists have always been […]

Perhaps Russia in the decades after the 1917 revolution is summed up in the very last room of the Royal Academy’s exhibition “Revolution: Russian Art 1917-1932” which shows the blowing up and demolition of the 19th century Cathedral of Christ the Saviour in Moscow in 1931, on the orders of Stalin, in order to clear […]