You are here: Home / Nathan Coley

In 1962, Jackie Kennedy extensively renovated and refurbished the White House, installing a 19th century hand-printed wallpaper ‘Les Vues de L’Amerique du Nord’, which is still made by the French firm Zuber & Cie, in the Diplomatic Room where it has acted as the backdrop to events with foreign dignitaries and press conferences ever since. […]

At 8am in the morning, the normally bustling Oxford Street is remarkably quiet and empty, with little activity but street-sweepers and rubbish collectors clearing away the debris from the day before, drivers in vans delivering new goods to restock the shops, cafes and restaurants for the day ahead and commuters spilling out of the underground […] 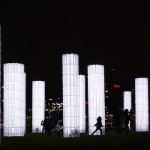 Why have the usual Christmas lights when you can do better and have an illuminated forest – an art installation which also celebrates sustainability?   At Olympic Park a forest of 14 giant ‘Frozen Trees’ has sprung up,  Created from 1,296 reusable and recyclable IKEA plastic bag dispensers, the illuminated “Trees” are planted in the southern […]