At a time when the physical presence of galleries and art foundations seems very fluid, (in part due to the extortionate business rates these organisations have to pay – the Parasol Foundation being the latest organisation to indicate that it will give up its excellent gallery space near Old Street next year), the Goodman Gallery […]

It is well known that our built environment contributes to our well-being, and that there is a correlation in urban areas between high levels of pollution, ill-health and economic poverty.  After the Second World War, high quality new housing estates were designed by architects such as Powell and Moya at Churchill Gardens in Pimlico, to […] 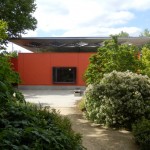 Nestling in a green landscape like a pavilion in a park, a colourful contrast to the grey car park which surrounds the towering 1970’s block of Charing Cross Hospital, Maggie’s West London is one of 17 centres at NHS cancer hospitals in the UK providing support to people with cancer and their family and friends. […]

In a week when it was pipped at the post for the Stirling Prize for its Saw Swee Hock Student Centre designed by O’Donnell and Tuomey, the London School of Economics held a public exhibition of the designs for its next project as it develops and transforms its central London campus – the Central Buildings […]

The “Cheesegrater”, officially called the Leadenhall Building, completed this week ready for its tenants and restauranteurs to move into the fit-out stage.   One of the highest quality of recent buildings in the City of London, with a high quality of materials and detailing that you would expect from Richard Rogers of Rogers Stirk Harbour […]