You are here: Home / artists studios

Bernard Leach arrived in the old fishing town of St Ives in Cornwall along with Shoji Hamada in 1920 – astonishingly almost 100 years ago.  He was in the vanguard of artists who established St Ives as a centre for British modern art from the 1920′s onwards, strengthened when Ben Nicholson, Barbara Hepworth and Naum […]

St Ives in Cornwall has a long history as a fishing village, with the old rambling Sloop Inn built around 1312 and a popular dinking place for fishermen since then, being the oldest pub in Cornwall.  The arrival of the railway in 1877 brought holiday makers seeking the sun and the sands and major expansion […]

It is fascinating to peep into the hidden world of an artist’s studio and see where he or she created their great work; sometimes they are tidy and clean, sometimes they are totally chaotic, with collections of things that inspire them, walls and floor splattered with paint and canvases or sculptures in various stages of […]

Rembrandt’s paintings and drawing may now fetch mind-blowing prices but Rembrandt purchased his house in Jodenbreestraat, Amsterdam, in 1639 and lived there until he went bankrupt in1656, when all his belongings were sold by auction.  During the time he lived there, he used the house as a studio for himself and also for his pupils.  […] 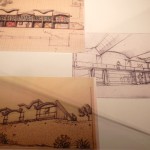