You are here: Home / Barbara Hepworth

I last visited the Pallant House Gallery many years ago, just after the new extension, and I had forgotten what an excellent modern art gallery it is – a surprising and pleasant find in Chichester where you don’t expect to find such an excellent gallery of modern art in a historic town, most famous for […]

St Ives in Cornwall has a long history as a fishing village, with the old rambling Sloop Inn built around 1312 and a popular dinking place for fishermen since then, being the oldest pub in Cornwall.  The arrival of the railway in 1877 brought holiday makers seeking the sun and the sands and major expansion […]

Opened in 2011, The Hepworth Wakefield is the centrepiece of the regeneration of this area of Wakefield, with its colourful old barges and warehouses that hopefully will be redeveloped, perhaps into residential accommodation and working spaces for artists. Celebrating the fifth anniversary of the Hepworth Wakefield, Phillips London is holding an exhibition of Barbara Hepworth’s work focussing […] 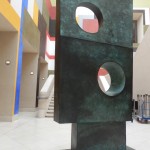 Barabara Hepworth is on par with Henry Moore as one of Britain’s greatest twentieth century sculptors and Tate Britain celebrates her life and work in a major retrospective exhibition which opened this week. The exhibition presents different aspects of her work as her life and career developed. The first room focuses on carved sculptures, often […]