You are here: Home / Cultural centres

The old historic town of Cordoba with its narrow alleys and small squares is awash with museums and galleries in the old houses of former rich and artistic families – it would take a whole weekend to explore them. The newest is unashamedly modern on the inside, while respecting traditional proportions and the historic urban […]

The noble title “Duke of Berwick”, (linked to the Berwick-in-Tweed in England), is recognised in Europe but not in England.  Created in 1687 for James Fitz-James Stuart, the illegitimate son of King James II and Arabella Churchill, the title was considered to have been forfeited in 1695 by the English Parliament after the forced exile […]

The challenge was to design one of the largest buildings in the country for one of its most historic sites.  In Portugal, the Government took the opportunity of its European Union Presidency in 1992 to construct a building to accommodate all the people involved in the Presidency and provide a long term cultural, conference and […] 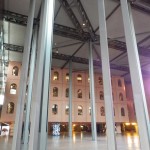 An immense former wine cellar in Bilbao constructed in 1909 has, a century later, been transformed into a cultural and leaisure centre by the French Designer Philippe Starck.  Three new buildings with well-proportioned brick façades and connecting bridges reminiscent of warehouse buildings have been constructed around public spaces and a huge atrium within the existing […]

Underground is the new place to go for culture and art, making use of engineered spaces, particularly when their original uses are now redundant.  Munich has its the Kunstbau – an underground gallery created in 1994 in a concrete cavern left empty when the Königsplatz subway station was built – and Westminster underground station in […]