You are here: Home / Spanish art

All the gallery spaces have been packed with international art collectors and dealers wandering around with pencil lights, examining paintings for signs of damage, restoration or downright fakes.  As at Sotheby’s, at Christies it is a week of classical art and antiquities, old masters from a rich panoply of European artists, and decorative items from […]

In New Bond Street, Franklin D Roosevelt and Winston Churchill sit on a park bench chatting in conversation.  Across Piccadilly, in elegant rooms in Bennett Street in St James, surrounded by London clubs, men sit in metal chairs in groups of two and three, laughing and smiling, with twinkles in their eyes, dice and a […]

Outside, surrounded by offices of media companies, something strange has happened.  The building frontage has been painted over over, as if it is derelict, but yet the images are a combination of classical Greek and modern urban art, with the light shining through inside as the colourful urban art contrasts with the more traditional art […] 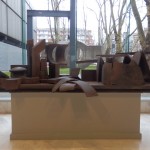 It is almost 430 years since the death of the Spanish painter Luis de Morales on 9 May 1586 yet his paintings have a freshness and colour that makes them feel much more modern.  Stylistically, they follow the Italian Renaissance painters such Leonardo, with less softness to the features, a trait which can be seen […]