You are here: Home / UCL

As the eyes of the world focus on sporting achievements at the 2016 Olympics in Rio, the masterplan for the next phase of the long term development of the Queen Elizabeth Olympic Park in Stratford, created for the 2012 London Olympics, is on view in Zaha Hadid’s Aquatics centre.  The proposed new Cultural and Education District is an ambitious […] 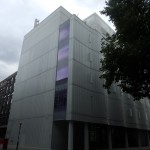 Fitrovia in London has a new and different piece of architecture.  Now able to be seen in its finished state, the unique undulating façade designed by Ian Ritchie Architects announces the arrival of the new Sainsbury Wellcome Centre at University College London (UCL), a partnership between the Gatsby Charitable Foundation and the Wellcome Trust to establish […]