Running along the Thames, Battersea Park has many aspects and different areas to be discovered within it.  Tucked away, hidden behind the trees is Battersea Evolution, which houses many events and exhibitions, five minutes walk from the Pump House Gallery.  This week it has come alive with the best of affordable art from around the […]

Flocks of colourful birds perch on the outside and inside the entrance foyer, less sinister than in Alfred Hitchcock’s famous film, but still in sufficient in numbers to threaten an invasion.  Inside, elephants are roaming through cities, while the forest, once cut down for new buildings, is growing back through the crumbling concrete ruins of […] 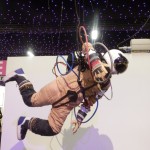 Two astronauts, Daphne and Apollo, like their Greek namesakes, are flying on a quest, to explore new worlds where no-one has gone before, far beyond the current limits of knowledge and experience where something new and unexpected may be found. Daphne and Apollo, created by the Canadian artist Sarah Fortais, are made of materials found on […] 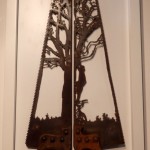 Imagine a world in which antique rusty hand-saws which for many decades were used to saw through trees, branches and timber planks become transformed into trees…..Imagine a pile of old wooden rulers which used to measure out timber for marquetry themselves becoming marquetry panels…..Imagine ordinance-survey maps that illustrate the location of woodlands in your neighbourhood […]

Picasso created his brilliantly simple sculpture the “Bull’s Head” in 1942 from the seat and handlebars of a bicycle. At the time, it was so radical that the sculpture was one of several pieces that had to be removed from an exhibition in 1944 at the Salon d’Automne after visitors were so shocked that a […]

Celebrating its 15th year, the Affordable Art Fair (AAF) returns to Battersea with 110 galleries from across the UK and Europe showing a wide variety of artworks for sale from £40 to £4,000. This year seems to have a particularly wide and diverse range of works from a variety of international artists including traditional paintings, […]