You are here: Home / exhibition venues 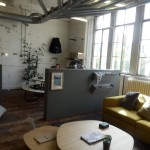 If the grey hulking mass of the former Central St Martin’s Building in Southampton Row, London has ghosts of its former students and staff walking through the empty rooms, left almost as they were when the doors were closed and the School moved to its magnificent new building at King’s Cross, then they would be […]