Goodbye the single portrait; Hello to the double, with figures intertwined sometimes in sensual ways.  Francis Bacon is here at the Gagosian with their third exhibition of his work, this time focused on double figures, sometimes on a couch, sometimes with a monkey, sometimes on the grass, sometimes working in a field, occasionally lying together […]

Walter de Maria was born in Albany, California in 1935; Tom Wesselmann was born in Cincinnati only 4 years earlier, in 1931.  They are therefore almost contemporaries, but their work couldn’t be different, as shown by the two exhibitions facing each other across Grosvenor Hill in London at the Gagosian and Almine Rich galleries.  Both […]

Outside is the modern city of London, with the gardens of Berkeley Square not far away, the bulbs beginning to burst through the cold earth as the first indications of spring.  On approaching the modern building, the large glass door in front opens silently as you are drawn in to what seems another world – […] 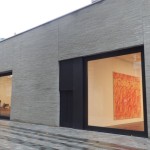 Are there still spaces in the crowded urban area of central London for development of art galleries, unless part of a major redevelopment such as Phillips in Berkeley Square or Hauser and Wirth in Savile Row.  While it seems highly unlikely, the White Cube found the site of an old electricity sub-station in Mason’s Yard, […]