You are here: Home / Museums

Two hundred and four years ago, on the 18th of June 1815, the Duke of Wellington defeated Napoleon at Waterloo in what was a turning point in European politics.  Four days later, Napoleon abdicated.  The battleground in Belgium has, as the main memorial, a huge 43m high mound (with no lift) that, apparently, the Duke […]

The building looks promising, in the refurbished former Fix Brewery located not far from the Acropolis Museum, but it remains half empty.  With an ambitious focus of showing that Greece is not just about ancient monuments but has a vibrant contemporary art scene, the National Museum of Contemporary Art, Athens (EMST) has a completed building, […]

Standing like a symbol of the revitalisation of Amsterdam’s harbour on the IJ River, René van Zuuk’s sculptural Architecture Centre for Amsterdam (ARCAM), completed over a decade ago, represents the design-led regeneration which has brought buildings such as the historic Armoury, now the National Maritime Museum, into the 21st century and provided new high-quality contemporary […]

On the steep road from Lisbon Cathedral up to the Castle of St George a sombre-looking building rises up, perhaps reflecting its history as a place of incarceration and torture, in use as recently as the 1960’s. Originally built as an ecclesiastical prison, becoming an archbishop’s palace in the 16th century and, after survived the […]

I M Pei’s Pyramid at the Musée du Louvre has more than proved its value.  Opened in 1989 for planned visitor numbers of 4 million per annum, it now has to cope with almost 10 million though it struggles to do so, while the main courtyard area provides an important public space for Paris during […] 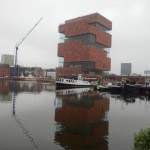 The Hansahuis, built in 1568, was the economic heart of the Hansa towns in Antwerp until it burned down in 1893.  Today, on the same site a new building has risen up – the MAS (Museum aan de Stroom // Museum on the River) which brings together the collections from the former Ethnographic Museum and […]

2017 will be a memorable year for the Victoria and Albert Museum as it completes its largest new building project in the museum for a century with the new Exhibition Road Building Project, details of which are currently on display alongside some of the work from  the arts residency of Lain O’Connell. There has been […]

Malaga, birthplace of Pablo Picasso, has been developing as a major centre for the arts over the last 15 years with the opening of the Picasso Museum and the Centre for Contemporary Art in 2003 and the Museo Carmen Thyssen in 2011. This year will see two major new additions to its cultural life with the […]

The Imperial War Museum in London had a major redevelopment about 30 years ago after a study into future options considered, among others, relocation to Bankside or Battersea Power Stations, but it was decided to remain and redevelop in its original home.   At that time, the redevelopment proposals were not without controversy because of […]