You are here: Home / Richard Avalon

The entrance may today look relatively grand, though perhaps a little unusual in the expensive property world of Mayfair, squashed as it is between two taller buildings, but 13 Carlos Place was once the brick back wall of the squash courts of the rather grand house at 47 Grosvenor Square built in 1924 to designs […]

What happened to those relaxing times, before the fast pace of modern life with constant emails and power showers, when we had time for long luxurious lingering baths overflowing with bubbles, with a good book to read, the radio playing soothing music and a favourite cocktail to hand.  Irving Penn captured this lost world in his […]

While it may not officially be called that (as yet), it’s London Photography Week this week.  Photo London 2016 opened at Somerset House on the same day that Phillips held an auction of masterpieces of 20th and 21st photography, while the finalists for the Deutsche Borse Photography Foundation Prize continues on show at the Photographers’ […] 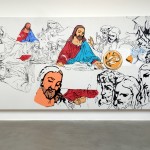