You are here: Home / Serpentine Gallery

Separated by only a decade, Luchita Hurtado being born in Venezuela in 1920 and Faith Ringgold in New York in 1930, these two artists have arrived at the Serpentine Gallery this summer. 80 years of work in the first London exhibition by Luchita Hurtado fills the Serpentine Sackler, exploring how her work has developed over […]

An immense amount of Welsh slate rises up outside the Serpentine Gallery, supported on astonishingly slender steel rods, almost twig-like in their scale.   Minimalist, as you would expect from a Japanese architect, Junya Ishigami’s huge roof of many tens of thousands of tonnes of slate tiles, for which AECOM were the engineers and project […]

Previously unseen works from two modern artists – British artist Victor Pasmore (1908-1998) and Swiss artist and healer Emma Kunz (1892-1963) at the Marlborough and Serpentine Galleries in London, – both artists in their own different ways manipulating geometry and using shapes, proportion and line in their work.  Pasmore was 16 years older than Kunz […]

From a distance, this year’s Serpentine Pavilion by Mexican architect Frida Escobedo looks a little like a series of dark wickerwork walls, rather than a pavilion. Inside is different, with reflections from the shallow pool of water and from the polished stainless steel ceiling that both protects from the weather and also visually doubles the […]

The central space with its white walls and high windows could be in New York; the adjacent rooms however have views out to the green grass and winter trees of Kensington Gardens, even though canvases are stacked against wall, as they are in Wade Guyton’s New York studio.   On the walls are images which from […]

The Serpentine Gallery in leafy Kensington Gardens, located in the Royal Borough of Kensington and Chelsea, a borough which highlights many of the contrasts in British society and which, against all odds, elected a Labour Member of Parliament in the recent General Election, is the appropriate location for Grayson Perry’s exhibition over the summer, “The […]

A treat this year in London has been two summer pavilions, one at the Serpentine Gallery, a continuation of their excellent long-standing programme, and a new initiative at the Dulwich Picture Gallery.  Sensibly, as it has turned out, both were designed for the rain which has characterised London’s weather this summer. Imagine the green grass […]

Was it happy coincidence or masterful planning that, with the new Mathematics Gallery designed by Zaha Hadid Architects opening at the Science Museum, the Serpentine Sackler Gallery, refurbished in 2013 with a swooping, flowing extension by Zaha Hadid Architects, is filled with an exhibition of Dame Zaha Hadid’s early drawings and paintings.  In contrast to the curves of […] 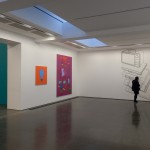 A giant semi-translucent boulder has appeared in Kensington Gardens London, with the opening of this year’s Serpentine Pavilion, designed by Chilean architect Smiljan Radić.  Is it a boulder or a shell?  Or both?  Externally it appears as a huge boulder sitting on quarry stones, but close up it appears as a shell with a thin […]