You are here: Home / Marlborough Gallery

In the staircase and up to the first floor at the Marlborough Gallery above Lars Fisk’s exhibition ‘Wattle & Daub’, is a splendid series of prints by 20th and 21st century artists Victor Pasmore, Ken Kiff, Bridget Riley, Louise Bourgeois, Grayson Perry and Beatriz Milhazes, covering the last 40 years and showing the variety and […]

While theatres, coliseums and arenas have arcs and curves, most houses in our cities and towns are created of straight lines to create square, rectangular and occasionally angular rooms, with (of course) some grand exceptions like those magnificent staircases or ballrooms in grander houses.  Think too of art galleries.  Apart from unusual spaces such as […]

Outside it is a cold December evening as daylight is dying and the sparkling Christmas lights are springing into life.  Inside you enter a different world, a world that is more linked to the earth, perhaps to the time before this area of Mayfair was developed, first with the 17th century Mansion Clarendon House and […]

Previously unseen works from two modern artists – British artist Victor Pasmore (1908-1998) and Swiss artist and healer Emma Kunz (1892-1963) at the Marlborough and Serpentine Galleries in London, – both artists in their own different ways manipulating geometry and using shapes, proportion and line in their work.  Pasmore was 16 years older than Kunz […] 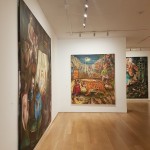 How many people have heard of the arch-criminal Fantômas created by Marcel Allain and Pierre Souvestre in 1911 and one of the most popular ruthless and evil geniuses in modern French crime writing? Fantômas is the cause of almost any unsolved crime, a merciless criminal who can get away with his evil deeds by impersonating […]