Separated by only a decade, Luchita Hurtado being born in Venezuela in 1920 and Faith Ringgold in New York in 1930, these two artists have arrived at the Serpentine Gallery this summer. 80 years of work in the first London exhibition by Luchita Hurtado fills the Serpentine Sackler, exploring how her work has developed over […]

The historic old Magazine building which is now the Serpentine Sackler has been taken over by German film-maker, artist, writer and digital innovator Hito Steyerl.  The rooflights which normally allow daylight to flow down into the spaces have been covered over and the building is now a series of dark spaces where you can make […]

Sometimes you visit an exhibition which appears to have more behind it than is first apparent.  This is the case with Grace Wales Bonner’s current exhibition within the old brick walls of the magazine building that is now the Serpentine Sackler Gallery.  To the uninitiated, it leaves more questions than answers as they explore the […]

Visitors to the Serpentine Sackler Gallery are immediately engaged with Rose Wylie’s work their silhouettes project onto the first work they see, with the low winter sun penetrating into the gallery, in the same way that they would create a silhouette if they stood in the light of a film projector, a highly appropriate link […]

Was it happy coincidence or masterful planning that, with the new Mathematics Gallery designed by Zaha Hadid Architects opening at the Science Museum, the Serpentine Sackler Gallery, refurbished in 2013 with a swooping, flowing extension by Zaha Hadid Architects, is filled with an exhibition of Dame Zaha Hadid’s early drawings and paintings.  In contrast to the curves of […] 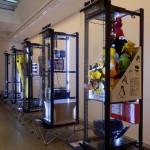 Imagine a race – one team running as fast as they can to capture and organise data; the other running at the same speed to find the data and set it free. This is the race that Simon Denny explores in the brick-vaulted rooms of the Magazine, the former gunpowder store built in 1805 in […]

The Serpentine’s new Sackler Gallery is proving itself as a flexible venue for contemporary art installations of all forms, by the nature of its bold, simple and robust spaces.  The latest exhibition showcases the work of Ed Atkins, one of the most prominent young British artists working with high definition video and text, intertwining moving […]