You know you are getting old, when the art and culture of your youth has now circled round again.  The vibrancy and innovation of the 1980′s and 90′s have returned, with ‘Sweet Harmony: Rave Today’ at the Saatchi Gallery, and now ‘New Order: Art, Product, Image 1976-1995′ at Spruth Magers in Mayfair, an exhibition curated […]

The 1920′s was an era of prosperity and fun after the austerity of the First World War.  The cinemas were full of films by stars such as Charlie Chaplin, Mary Pickford, Douglas Fairbanks, Joan Crawford and Greta Garbo and transatlantic liners carried the rich and famous across the Atlantic between Southampton and New York.  No-one […]

It is fascinating to compare two houses in Mayfair built by Sir Robert Taylor in the 1770’s, now both occupied by international art galleries, and how they have survived and been altered over the years.  Galerie Thaddaeus Ropac has a beautiful house retaining its neoclassical interiors, connecting through from Dover Street to Berkeley Street with […] 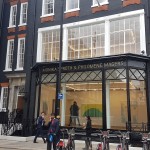 7a Grafton Street in Mayfair was built around 1772 as part of a row of fine townhouses by Sir Robert Taylor, with subsequent alterations in the 1920′s/30′s.  Berlin-based Sprüth Magers, who formerly had a constrained gallery space on the ground floor, have returned, taking over the newly-refurbished building to give them four levels of gallery […]