You are here: Home / Architecture

The Royal Institute of British Architects (RIBA) is running a fascinating architectural exhibition on “Forgotten Spaces” in Somerset House’s own hidden passageways and coal holes; the Lightwells and Deadhouse below the main courtyard. The exhibition features 26 innovative propositions to revitalise a number of London’s disused and abandoned spaces, selected from a massive entry of […]

English Heritage this week announced the latest proposals for improving the visitor experience at Stonehenge. Those of us with long memories will remember a number of proposals over the years, but these seem relatively modest, sensible, and achievable. The new £27 million proposals by Denton Corker Marshall will be relatively discrete and hidden from the […] 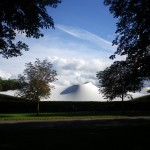 The new extension for the Serpentine Gallery, designed by Zaha Hadid, in Kensington Gardens is better inside than out.  The outside is white and, from the front and rear, very simple curved waves; I’m  not sure how it will weather in the UK.  The inside however is a unique womb-like restaurant interior with a milky […]

Proposals have just been published for a new Crystal Palace to be built in south London on the site of the old one which burnt down in 1936.  With a fair wind, work would start on site around 80 years after that event. The project will create a new cultural centre, with catering and conference […]

Adjacent to the new King’s Cross Square at an enviable position between the two great stations of King’s Cross and St Pancras is the Great Northern Hotel, claimed to be the “original railway hotel”. Like many railway hotels, it had suffered years of decline and no doubt at some point there were thoughts of demolition, […]

To much acclaim, the ghastly unloved 1970′s canopy which scarred the facade of King’s Cross Station has been removed and the station restored to its original glory, as has the adjacent Great Northern Hotel.  After years of inconvenience and almost daily changes in traffic routes, the area in front has been transformed into a new […]

Buildings are like people – they are born, they develop, they age and they die.  Photographers love buildings when they are new, often before people have even inhabited them; photographers often also like them when they are in decline. A sad reflection of the changing industrial landscape is the impact on the historic and forgotten […]

At the top of the Walkie Talkie in London, and hopefully not affected by rays of sun as the facade has been, will be the highest gardens in Europe – on the 35th floor.  Designed by landscape architects Gillespies, with over 2000 plants selected with advice from Kew Gardens, the Sky Garden will compliment the […]

In the surroundings of a dereict old sorting office, designjunction exhibited a wide range of exciting new furniture, lighting and product design from around the world, including both leading global brands and emerging enterprises. This year, designjunction returns to the centrally-located 1960s Postal Sorting Office, where a powerful line-up of renowned international brands, smaller cutting-edge […]

If you are building a refuge at one of the highest locations in the world, it has to be sustainable.  This must be a potential stunning location for a future James Bond movie.  On top of Mont Blanc, this mountain hue refuge is a welcome respite for mountaineers.  Located 3,835m high it overhangs the Aiguille […]