You are here: Home / Frank Gehry 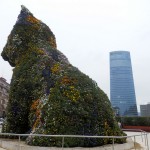 Floating above the Bois de Boulogne in Paris are the glass sails of the Louis Vuitton Foundation, the new $143 million art museum and cultural center sponsored by LVMH, designed by Frank Gehry and opened in October 2014. This new addition to the cultural life of Paris has not been without controversy.  The park is […]

New designs by Norman Foster and Frank Gehry for a neighbourhood of 1300 homes as the third phase in the redevelopment at Battersea Power Station in south London were published yesterday.  What a contrast between the two architects – Foster creates a cool well-mannered design that builds on his other work nearby; Gehry in contrast […]

Latin American architecture and art is noted for its bright vibrant colours. Ricardo Legorreta is perhaps the best-known architect who brought this vibrancy to his projects outside his native Mexico, even in London.  Now the American-based architect Frank Gehry has adapted his style of architecture, often characterised by broken and geometric roofs such as in […]

Frank Gehry is well know from the curvilinear forms that he uses in his buildings such as the Guggenheim Museum in Bilboa and the Stata Center for MIT in Cambridge, MA.  As many architects do, he has turned his design skills to other things including furniture, jewellery for Tiffany & Co and a glass bottle […]