What will artists, novelist, playwrights and film-makers make of the current coronavirus crisis?  Will there be a huge new body of work focused either on the deep dark depression of the crisis or on the joy and new world as we come out of it, ready for the next such contagion is around 20 years […]

It’s the detail that is astonishing.  You can stand and look at Naqsh Collective’s ‘Akka Artwork’ for an immense amount of time, and you will not become tired as you see more and more fascinating detail.  It is as if the Collective has tried to describe an imaginary modern Arabic city, from the layout of […]

Two Italian artists Giovanni Ozzala (born in Florence in 1982) and Fabio Viale (born in Cuneo in northern Italy seven years earlier in 1975) bring different views of the connections between ancient and contemporary art. Giovanni Ozzala’s website which starts with a powerful video of him standing alone on a sea wall with a desolate barren […]

Pop Art is still alive and well.  Brigit Riley created her famous painting ‘Pause’ on show in the current exhibition at the Gazelli Art House in 1964. Now in her late 80′s, she has just completed her staircase mural ‘Messengers’ at the National Gallery in London.  Brian Clarke produced his ‘Three Hand Grenades’ in 1969; […]

Our civilisation is in flux.  It’s not Brexit that will have the largest impact – that will soon be the past and it is the future that we need to look to – AI, VR, the successor to the ipad, digital technology and changing computerisation.  Many artists are embracing new technology in innovative ways, moving […]

Here we are in Mayfair in London, the temple of conspicuous consumption, with Ferraris and Bentleys parked in the street outside and an Aston Martin outlet across the road. while builders seem to be working everywhere and the restaurants are always busy.  There are no problems about the future of the High Street here. Enter […] 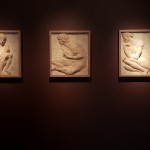 Continuing with the Greek theme, Greek-born artist Kalliopi Lemos has taken over the Gazelli Art House in Mayfair with her exhibition ‘All is to be Dared’ which follows on from her exhibition in 2016 links to the achievement a century ago of women achieving the ability to vote, and the ongoing battle for equality, but […]

Don’t throw out your old paint pots, your old mops, tables, pots and pans, garden spades, musical instruments, desks  or bread bins.  In fact don’t throw out anything.  With imagination, these are not redundant materials, destined for the rubbish tip, but are the raw materials for new art, giving old materials new life. Goodbye to […]

Go to the Louvre and try to see the Mona Lisa and you will find a sea of mobile phones and ipads held up by a hoard of tourists who have walked past stunning – and ignored-masterpieces to reach it.  It is therefore not surprising that artists are beginning to reflect on this impact of […]