You are here: Home / Lisson Gallery

Twentieth century urban planning has not been good to Edgware Road in London – the start of the busy road north that joins to the AI and thence to Scotland, when transport planners ruled the roost and created the flyover high above the road taking traffic out west, eventually to the M40 and thence to […]

Standing in front of you is a well-dressed young woman smoking a cigarette, not what you expect to see these days, beyond which is a large carpet made from multi-coloured run, with a predominance of red, and words projecting from the carpet in tufted wool, both in English and Chinese.  You tread carefully over the […]

While Anish Kapoor’s reflective optical works are pulling in visitors to the newly refurbished Pitzhanger Manor, more sombre sculptures are at the Lisson Gallery, against the backcloth of paintings, not often displayed, and out in the courtyard like historic monuments in this multi-cultural part of London.  If you walk past the Gallery, you can see […]

Graphite is an amazing material – at one end we all have some at home in our HB pencils; on the other, when compressed under high pressures, it can become one of the most expensive and luxurious gems on earth – a diamond.  If you have ever visited a diamond mine, you will realise what […]

While weary travellers passing through Paddington Station in London await Spencer Finch’s artwork of clouds to uplift their day when the new Crossrail Station opens, a short walk away across Edgeware Road Finch’a work fills two floors Lisson Gallery in Lisson Street in anticipation of what is to come.  Many of his works, such as […]

Our civilisation is in flux.  It’s not Brexit that will have the largest impact – that will soon be the past and it is the future that we need to look to – AI, VR, the successor to the ipad, digital technology and changing computerisation.  Many artists are embracing new technology in innovative ways, moving […]

Passers-by stop and stare down through an expansive glass window into a white space.  But, wait, have the Health and Safety police been here?   A large yellow warning sign has appeared “MAX HEADROOM – 3.373M (11’3/4”) It’s so very precise – is anyone going to check that exactly?  Has someone been injured by walking […]

Edgware Road, a major route out of London since Roman times, goes through many transitions, with the area around Paddington dominated by the Marylebone Flyover soaring across the road and, with its adjacent side roads, uncomfortably separating the two different entrances to the tube station underneath and creating what is probably the lowest point in […]

This year must be one of celebration for Christoper Le Brun, President of the Royal Academy which celebrated its 250th anniversary with the much-acclaimed project which connects and integrates the two buildings in Piccadilly and Burlington Gardens and where one of his paintings in on show in the exhibition ‘The Great Spectacle’, a quick canter […] 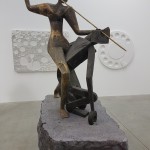 It’s funny how, without planning, a theme for a number of different, but related, exhibitions comes together at one time.  This spring it is the relationship with Greece, both in Britain and also in the USA and Mexico with exhibitions including ‘The Classical Now’ at King’s College London, ‘Charmed Lives in Greece’ at the British […]