You are here: Home / Woolff Gallery

What is really annoying is the amount of things that can’t be recycled, especially when it comes to plastics, and what do you do with your collection of rubber ducks when the children grow up and no longer need them.  The answer?  Give them to artists or to schools for art projects – paint on […]

A gorilla looks out of the window at the rain pouring down in Fitzrovia as a month’s rainfall pours down on London in a couple of days.  Perhaps he is thinking of the warm climate from which he has come or, like all of us, wondering where summer has gone. Photographer GraemePurdy’s stunning and dramatic […]

Sometimes with art you have to look at the detail and the amount of work that has gone into it.   Often, as you look hard, it is surprising to see how much detail and how much work has gone into the artworks – and Susilia’s work falls into this category.  It must be so […]

The best exhibition yet by the young British artist Jack Tanner has opened at the Woolff Gallery at Fitzrovia, demonstrating Jack’s mathematical prowess using screws and paint with intricate precision to create three dimension graphic, geometric and optical works.  The window of the gallery is covered with Jack’s trademark screw heads and, inside, his early […] 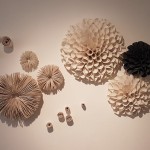 One of the questions which was not really discussed in detail at the London Real Estates Forum this week is how, in areas such as Fitzrovia, can the traditional character and identity with many small independent art galleries be retained as developers such as Derwent inevitably redevelop their properties, for example at 80 Charlotte Street.   Recently, […]

Towers of computer cables and accessories become works of art, reinforcing the potential to re-use the electrical, computer and mobile phone connections that modern society discards, in part designed by computer companies to have a limited life and with a cable for one device not connecting into another, often even from the same company.  Thus […]

Banksy may have created a fun park in Weston-super-Mare, but here in London the designer-sculptor Finn Stone has taken over the Woolf Gallery for a world of fun and imagination through his colourful and amusing sculptures. Finn turns the world upside down.  Well-known paintings by Leonardo da Vinci, Picasso, Warhol, Van Gogh and others great […] 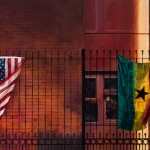 At Lazarides Rathbone, the “cityscape artist” Frank Laws presents a series of paintings, some of which are derived from housing estates in the changing area of Hackney, commenting on the contrasts between the grittiness of such housing and the hope and warmth of the people who occupy it, and the need and ability to create […]

As David Cameron and the Conservative party achieved a majority in the House of Commons in the recent UK election, other leaders fell.  At the Woolff Gallery in London, unique portraits by Anne Marie Wright are also coming down at the end of the exhibition  “What do You think – 2015 Election Special”. Anne Marie […]